Film Night, offers a 3-hour online film/talk program showcasing any one of his  films:

Stolen Ground, The Color of Fear, Last Chance for Eden, or If These Halls Could Talk. 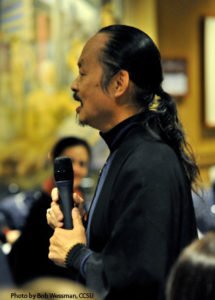 Lee Mun Wah will introduce his film and give some background information and then at the end of the film, answer any questions: how it was made, how he chose the cast, why he made the film as well as how his films have impacted the country, given all the turmoil and anguish occurring around diversity issues.

This is a once in a lifetime experience to meet the director and hear his stories growing up in the flatlands of Oakland to one day being honored in the boardrooms of corporate America to the halls of the Pentagon and eventually being on the Oprah Winfrey Show. His journey and stories are intriguing, insightful and inspiring.

For more information and how to reserve a film showing at your site: