It would be naïve to believe that once Donald Trump leaves office that we can simply move on because we have removed the “problem.” The problem is not just Donald Trump, but what he represents: A segment of America that is desperately afraid to let go of control and power. A country that is fearful of “those people” taking over and squeezing out all those who have “earned” their place in this society by hard work and determination. Once again, it is the old rationale that the reason underrepresented groups are not as successful as whites is because they are lazy, not willing to work hard, want to “live off” welfare, in gangs, break most of the laws, choose to be poor, and are always ready to play the “victim card.” Hence, “Make America Great Again.” Sound familiar? These same groups also believe that institutional oppression does not exist and is simply a figment of imagination of those who are agitators, communists, and socialists.

The truth be told: We have a long way to go. This recent election lifted the “veil of pretense” that all is well in our country. It is not that we have suddenly been corrupted, but rather that discrimination has existed in this country from the very onset of our birth as a nation. We keep repeating this part of our history because we continually keep postponing a conversation of why we are “fractured, unequal and divided” and the impact it has on our health and safety as a people, a community, and as a country. Once we begin to examine how we each are a part of the problem and the solution, then we can begin the process of healing and moving forward.

What I would like to challenge us all to look at as we enter into this new year 2021 is — not only what is not working and why — but how much of what we hate and despise also exists in ourselves and those around us. As a white person shared in my book, Let’s Get Real: What people of color can’t say and whites won’t ask about racism:

“I grew up in a white liberal family where racism was something that bad white people did, while a good white person wasn’t even supposed to notice race. An African American man once asked me, ‘What do white people say about race when there are no people of color around?’ My first answer was, ‘They don’t talk about it much, if ever.’ If we do, it is usually in very limited ways.

Talking about race or racism on the personal level or how I feel about my race or another person’s race is taboo. So, that makes it hard. Even in situations with white people who ‘get it,’ there is still an edge. We may want to tell each other stories that show how we get it, not about how confused we might be or how a painful situation just happened that we feel awful about. The hardest thing is feeling my own vulnerability and staying open to the other person’s experience, at the same time.”

I once wrote in my diary: “It was never the truth that I regretted, but all the lies it took for me to get here.”

TIME TO BREAK THE SILENCE 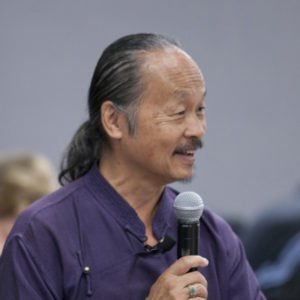